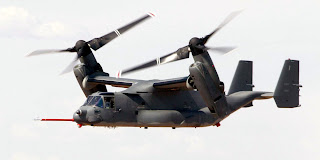 Boeing confirmed that it was "invited in-country to provide more information" on the V-22, but that it has not received "an official, written [request for information] from India".
In addition, Indian officials visited the V-22 aircraft during the Dubai air show in November 2011, where they asked questions about the aircraft.
The V-22 would be well suited to operations along India's vast Himalayan frontier, where high altitudes and long distances hinder helicopter operations.
At last year's Paris and Dubai air shows, Osprey representatives made much of a mountain rescue mission in June 2010 conducted by two US Air Force CV-22s. The aircraft flew a 1,290km (700nm) round-trip at 15,000ft (4,570m), landed amid mountainous terrain in dust storm conditions, collected 32 personnel and returned to base.
In response to a query about whether the V-22 could be fitted with a radar array for use on Indian aircraft carriers, Boeing said: "While AEW&C [airborne early warning and control] has been identified as a future mission well suited to the Osprey's performance profile and specifications, it is not a mission performed by current customers and it would be premature to speculate on what specific equipment would be utilised for that mission."
In 2010, the Indian navy requested information from Northrop Grumman on the E-2D Hawkeye AEW&C aircraft, which is capable of operating from aircraft carriers using steam catapults. This aircraft may not be suitable for current and planned Indian carriers, which rely on "ski-ramps" to launch aircraft. This restricts them to using airborne early warning helicopters, which are far less capable than their fixed-wing counterparts.