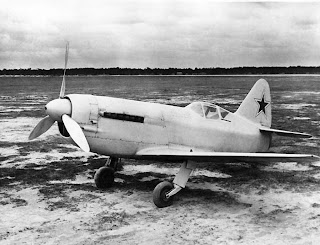 As 1944 began, Soviet aeronautical experts were already filtering through information of successful flight tests of British and American jet aircraft and the impending service introduction of rocket- and jet-powered aircraft in the Luftwaffe. The Soviet GKO (State Defense Committee- a wartime organization that ran the Soviet Union during the Second World War), headed by Stalin, quickly concluded that the different efforts by engineers doing research on jet propulsion at the time needed to be consolidated under one organization, the NKAP (People's Commissariat for Aviation Industry). By March of 1944 officials of the NKAP were ready to present Stalin proposals to accelerate Soviet aeronautical technology to match that of the Luftwaffe, but most importantly to keep up with the British and the Americans. Semyon Lavochkin, Artyom Mikoyan, and Pavel Sukhoi of their respective design bureaus (called OKBs) were instructed to develop jet fighters as a matter of national security. At the time, though, jet engine technology in the Soviet Union wasn't as far advanced as that of either the Germans or the British and American teams. Both Sukhoi and Mikoyan went looking for an alternative with more technical maturity to speed the development process of their candidate designs.
If we roll back the clock a bit to 1942, a special section within the famous aeronautical and hydrodynamics institute, TsAGI, in Moscow, was set up to explore jet propulsion. One TsAGI engineer, Ghenrikh Abramovich, had devoted time to study the use of a piston engine to drive a separate compressor that would force air into a combustion chamber like a jet engine, only the thrust from the combustion chamber was used purely for propulsion and would not be used to drive a turbine as was the case with a jet engine. Piston engine supercharger technology at the time was mature enough that work on what was called a "motor compressor engine" was simply a derivation of that work as many Allied engines used exhaust driven turbines to compress air for the supercharger to allow piston engines to operate at high power levels at higher altitudes. A motor compressor engine simply used a drive shaft to drive the compressor instead of exhaust gases.
(I should note here that some versions of the Pratt & Whitney R-4360 Wasp Major radial engine actually had a shaft-driven supercharger inside the engine. This would later lead to the VDT (Variable Discharge Turbine) which will be the subject of a future entry on this blog.)

The intended production version of the motor compressor engine was designated the VDRK. The piston engine drove an axial compressor in the VDRK with then not only drove compressed air like a supercharger to the engine, but also served the radiators. But the air was then passed into a combustion chamber mixed with fuel and ignited, allowing the VDRK's exhaust to act as a rudimentary jet booster. Both Sukhoi and MiG design bureaus selected the Klimov VK-107 liquid-cooled inline engine which via an auxiliary gearbox, drove the VDRK booster. At 23,000 feet the VDRK not only boosted the speed of the aircraft, it also boosted the power of the Klimov engine from 1,650 hp to 2,500 hp, making it an effective supercharger as well. An air inlet below the Klimov inline engine fed the VDRK. On takeoff, 95% of the piston engine's power drive the propeller. But once at altitude, a clutch was engaged which shifted some of the power to a step-up gearbox to drive the VDRK. The main engine's radiator was directly behind the axial compressor with a small diverter duct to feed compressed air to the engine like a conventional supercharger. The air that wasn't fed into the diverter was then mixed with fuel sprayed from seven nozzles and ignited by sparkplugs. At this point in the engine, the duct expanded to form a combustion chamber made of stainless steel to withstand the heat. At the very end of the fuselage a two part eyelid-like nozzle modulated the exhaust flow like a rudimentary adjustable engine nozzle.
In May 1944 the MiG bureau began work on their design using the Klimov/VDRK engine, the aircraft being designated I-250. The NKAP instructed MiG to have two prototypes ready for testing as high-altitude interceptors by late winter 1945. The specification called for the I-250 to be able to reach 16,400 feet in 4.5 minutes (less if not using the VDRK), a maximum speed of 502 mph (again, less if the VDRK was not engaged) and a service ceiling of 39,000 feet with the VDRK engaged. The armament was one 23mm cannon and two 12.7mm machine guns. By October the mockups were being reviewed by the NKAP and engine testing at TsAGI showed that the combustion chamber of the VDRK needed to strengthened. Given the urgencies of war, prototype construction had already started with the first flight of the I-250 on 4 April 1945 and on its third test flight, the VDRK was engaged for the first time. The second I-250 prototype was completed the following month, flying for the first time on 25 May 1945.
However, technical issues with the VDRK booster kept popping up and in July 1945 the first I-250 was lost with its test pilot when G-limits were exceeded and the tailplane failed. By this point the NKAP had concluded that the future of fighter aircraft lay with pure jet engines, but that the I-250 project was to continue to provide an aircraft that would give pilots experience in high speed flight. Sukhoi's Su-5 design was canceled as inferior to the MiG I-250 and a pre-production batch was ordered at the end of July for ten aircraft to be delivered at end of December. Power failures, winter fuel rationing and mounting technical challenges with the construction of both the aircraft (sometimes designated MiG-13) and the Klimov/VDRK engine meant that only one aircraft was built by the deadline. As a result, Stalin had the head of the NKAP arrested and a committee formed to investigate the reasons for the delays. Numerous directors, from the aircraft factory to the engine factories involved, were severely reprimanded (I cringe to think what a Stalinist reprimand involved) and the plant manager where the VDRK was built and his quality control manager were arrested and charged with industrial sabotage.
Despite this, another FIFTY aircraft were ordered in February 1946 and the first pre-production batch had yet to be completed let alone start State certification trials! A new deadline for July 1946 was set and when this deadline failed to be met, 24-hour shifts were imposed on all the manufacturing facilities involved in MiG-13 production. Seven airframes were completed, but the VDRK engines continued to be source of technical obstacles. It was already August 1946 when the eighth aircraft from the original ten-aircraft order first flew and it promptly suffered an engine fire. It wasn't until September of that year that the first aircraft were delivered to the Air Force for acceptance trials.
Oddly enough, at a meeting on 29 November 1946 chaired by Stalin himself, the pure jet MiG-9 and Yak-15 would be the main jet fighters of the Soviet Air Force and with the astounding prospect of getting superior jet engines and technical assistance from Britain, there would be no future for motor compressor engines. Despite this, Stalin instructed that acceptance trials for the I-250/MiG-13 continue and that production capacity be retained. By May 1947 the acceptance trials were in full swing and the Klimov/VDRK combination was FINALLY operating at specification. Since the Soviet Air Force was no longer interested in the aircraft, the naval air arm, AVMF, was convinced to accept the aircraft as an escort fighter for torpedo bombers. State acceptance trials were to continue under AVMF auspices at Riga on the Baltic coast, but continuing reliability problems and bad weather meant that only six flights had been completed by January 1948 and the VDRK had only been engaged once, and that one time was only 1.5 minute ground run. On 3 April 1948 the I-250/MiG-13 was declared as having failed its State acceptance trials and the aircraft faded into historical obscurity. By that time, the prototype of the MiG-15 jet fighter had already taken place in December 1947, powered by a license-produced Klimov version of the Rolls-Royce Nene engine obtained openly and with the approval of the British government!
Source: OKB Mikoyan: A History of the Design Bureau and its Aircraft